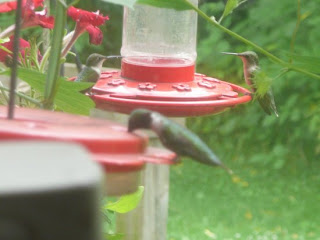 Just a few days ago it was "feeling like" 110 outside (actually it was about 92 or so) Today it was only 63 degrees. Not fair!! I want summer. Not roasting hot but nice and warm.

Me and Mom just filled the hummingbird feeders again. They sucked it dry.
You ever heard a hummer buzz past your ear? It sounds like a freight train!
Kinda scary for a second. I put a picture mom took on daddy's day. She finally caught three sitting at the same time. There is always 3-4 of those noise makers but they don't pose very well for camera like I do. *S* 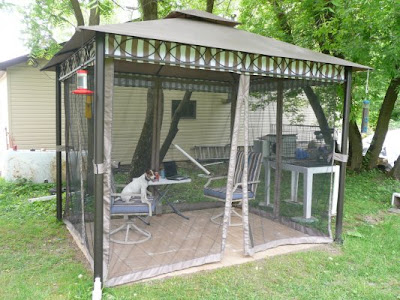 I was resting in the gazebo with mom after digging up another chipmunk hole.
It was nice out today but pretty breezy. Pretty soon we heard this cracking sound, and right before our eyes a huge branch came down from the tree above us.
Just missed the gazebo. whew...
I had to teach it a lesson (once my heart stopped pounding) by chewing on a few of the sticks it dropped along with the huge branch. Plus I gave it a piece of my mind.
I must have gotten thru to it, as it never got up and moved after that.
So I went back to digging.
Posted by Huntyr at 6:12 PM 2 comments 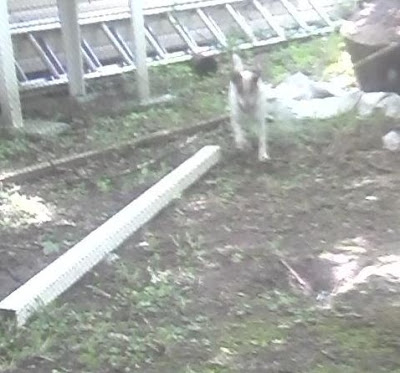 Yesterday was fun up until mom and dad left me home alone with that silly yakking bird.
Mom and I were outside in the gazebo, dozing off. Like a good boy, I kept one ear cocked for danger, (or fun).Soon I heard it. "monk" was chirping at me, and ran past me into a white thingy. I peeled out of the gazebo about 10ft to where a piece of rain gutter (so I heard mom telling dad,it was called) and I stuck my nose in the end. yummmmmmmmm it smelled good and fresh, but my nose only went in so far, and then I couldnt see. But hey who needs to see when you can sniff, sniff, sniff.
I ran to the other end of the pipe to catch it there. Hmmm smelled good, I got him cornered (BOL) I ran from end to end, when he makes a run for it, I will be there. Back and forth, back and forth, come on you silly chipmunk make a run for it! 15 minutes, back and forth. I bite the pipe, thought I could make it shorter and I could get him.
I rolled it length wise trying to shake him out. I even barked once at him but still he stayed in there. grrrrrr. Mom tried to get pictures on cell phone. Worthless pictures but hey better than nothing.
Back and forth.
Around and around.
Finally he made a move.
One of us was fastest.
Posted by Huntyr at 9:10 AM 0 comments

Mom got her car back from the car vet.
I tried to tell her that the front of the car was smelling mighty good lately.
But she was so worried about how much noise the A/C was making to listen
to me about the smell.
Well the vet doctor gets the blue ribbon this time. He found the mouse first.
I really did find it first, just noone was listening...
Posted by Huntyr at 4:14 PM 0 comments

No car today so its gonna be a lazy day. But no car mean no trip to the park either :(
We went to the park yesterday to find squirrels but they were hiding from the heat too.
I ran and ran looking but soon I just needed a drink so bad I ran to the car and said lets go home.
Posted by Huntyr at 5:32 AM 0 comments

Daddies buddy is gonna be fine! they stuck some little things in his heart and said he could come home tommorrow.
Whew... dad was nervous.

I am glad Butch's heart is gonna be better cuz its such a good one!
Posted by Huntyr at 12:16 PM 0 comments

mom just told me that our friend is having heart surgery today...

could every press paws together and ask that he is ok.....
him and daddy been best friends since they was puppies....
Posted by Huntyr at 4:59 AM 0 comments

wowow my friend Pappup must have been having fun last night, I could hear him singing... now that tune is stuck in my head...
"Take me out to the dog park / Take me out to the grass / Find me some frisbees & tennis balls / I don't care if I loo-oo-se them all""And it's sniff sniff sniff making new friends / If they won't play it's a shame / Cuz it's 1 - 2 - 3 hap py barks / At the old dog park"

hehe now I suppose its stuck in yours *S*...

1st place in barn hunt (finding the rat hidden in hay bales)
and 2nd place in "trailing and locating" (following a scent on the ground to the hidden rat).

I never did that before so I am thrilled at winning. Mom and I are exhausted, gonna zonk out for the night soon.....

69 dogs competed... I got about 8th in the lure running (only six places get ribbons and prizes) and the GTG which is usually my best event... well they changed the rules and didn't tell mom so even tho "I" did good, she blew it........

doesnt matter I had soooooooo much fun!!!!
Posted by Huntyr at 8:01 PM 0 comments

all day mom told me we were going to the farm to help set up the dog trial. Then it rained all morning we didnt go.... sun came and got hot.
But still we didnt get in the truck and go......
that stupid thing in her pocket was pulled out and soon I overheard we arent going till morning!
Morning!! early...... hey I like to sleep in.....

geeze supper time and dark as night outside... I am sticking close to mom just in case...you know.
I might have to save her.
Posted by Huntyr at 5:36 PM 0 comments

Mom just dragged me in the house when she realized I hadn't kept up with the blog.
I have been busy trying to catch the chipmunk all day. It was just a little hole when I saw him slip down into it. He didn't come back out so I figured he was stuck. The little hole is plenty big now for him to be "unstuck" yet I haven't seen him yet.

I saw mom getting out the overnight bag again.
We havent gone over night for a long time. I looked on the calendar and Saturday is MY big day.
The MWJRTC (midwest jack russell terrier club) is having a AWTA trial.
No racing.. :( but barn hunt yippee!!, trailing and locating, Go To Ground tunnels and lure course racing. Should be great fun if there is no rain....
Posted by Huntyr at 4:13 PM 0 comments

well its Friday! Mom promised me a trip to the park this afternoon. I am gonna curl up on the couch and make sure my battery is completely charged till its time to go.

She had her big Core 4 meeting last night. She says Core 4 is a brand new product hasnt even been launched yet and we were able to get into the company on the ground level. One new lady joined the team and one other is starting on the losing weight program. More money to buy doggy treats with LOL
Posted by Huntyr at 7:27 AM 0 comments

Well today is dad's birthday. I been on my best behavior all day.
Smells really good in the house, mom is making what she calls a roast for dad. It's his favorite food. Sounds good to me, cuz I will sit at his feet with my best "starving" look and I am sure to get a taste.

Dad's out practicing his horseshoe pitching now, then it will be dinner time. I wonder what me and mom will do while dad goes to pitch horseshoes in his league tonight.

I will try hard to beg her to go look for squirrels. All I found in our yard today is a little bitty snake. boring!
Posted by Huntyr at 4:32 PM 0 comments

It was nice out yesterday but I had to stay home locked in the house all day. Dad had a horseshoe tournament and mom went with him. He says he did really well but still ended up in third place. I say, hey third place is ok!!

Today I get to go with mom when she goes into town. It's boring sitting in the car all the time when she does "errands" but we do have to drive past the "squirrel" in and out of town. That gives me two chances to talk her into pulling into the park for a little bit. *S*
Posted by Huntyr at 6:53 AM 0 comments

Well looky here, I finally got my own page to write things about all the fun stuff mom and dad take me too.
Yesterday I got to go with her to the doggy food store. Its not real close to home but I don't really mind riding in the car.
There was lots of other doggies there and lots of people giving away free yummy treats. I saw mom get a bag full of little bags, I sure hope they are filled with good things to eat or play with.

I am a member of the Mid West Jack Russell Terrier Club. We meet once a month for a fun day and do all sorts of really fun things!!

Well I better get back to figuring out how this thing works so I can write to you all often.

Other things for you to sniff out

Huntyr
3 year old Jack Russell Terrrier who loves to dig, run, and "look for rats" at all the JRT trials and fun days.